The Tape Lab engineered solutions are tailored to meet the needs of our customers, whether to protect the surface, keep your edge, or protect those in between places. We help customers protect the surfaces of their parts and shield them from all types of manufacturing.

The Tape Lab isn’t just a tape distributor selling off-the-shelf surface protection film and tape. We create engineered solutions using our know-how of advanced converting techniques to deliver our customers customized products to keep their products safe from damage in transit or within work cells. The Tape Lab can customize the adhesive and carrier to give our customers the perfect solution for their needs.

The Tape Lab can also custom perforate the surface protection tapes to make applying the film or tape easy to use on the manufacturing floor. We can help design, develop and manufacture all your surface protection films and tape under one roof, and that gives us full control of the process and cost structure to take ideas to market. Ask us about what we can do for you.

There are so many applications where surface protection films and tapes can be used in today’s workplace. The Tape Lab carries a variety of surface protection films and tapes, which are made with a co-extruded Polyethylene (PE) film and have an adhesive backing that has a removable adhesive that won’t harm or damage the surface you are trying to protect.

Surface protection film is designed to protect critical surfaces from being scratched, marred, ans from abrasions, UV exposure, or contamination and dirt. These type of surface protection films are popular and successful due to its strength and short term durability. Protective films come with one side that is an adhesive tape. It’s produced from thin film layers bonded together to create a “protective”barrier. It’s used extensively by manufacturers of metal and plastic moldings and sheets. Consumers typically see protective films on appliances so they do not get scratched during transport. They are also used extensively in the automotive and electronics market for the same reasons as the appliance industry. Some protective films reduce the penetration of sunlight and UV rays. 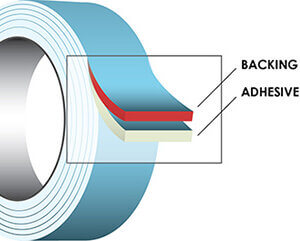 What is protective film in Mobile?
Often mobile devices are protected with a self wetting out urethane Pressure Sensitive Adhesive (PSA) and film that protects the surface of the device from scratches and dents.
What is polyethylene?
The Tape Lab’s PE protective film tapes protect our customers products, and in the process do not corrode or scratch the protected surface.

Fill out the form below with as much detail as possible, and we’ll get back to you right away.